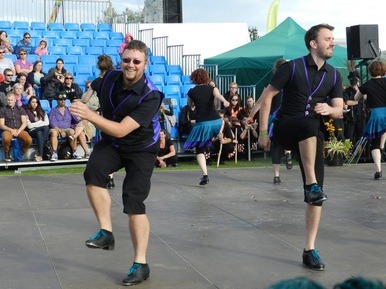 We're an Appalachian clogging team which formed in Brighton in 2010. As Chris Rudd (on left in photo), wrote for the Friends of American Old-Time Music and Dance's Old Time News:

We started the team because we missed dancing Appalachian so a few of us, still based locally, started thinking about setting up a new team in Brighton. We were also being badgered (in a nice way!) by a few friends who had taken part in workshops at festivals and were really keen to learn more.

Our aim is to present a team with precise stepping, moves, dance links and so on, so people can really appreciate the dance and music - and also to have as much fun as possible! We plan to incorporate other styles of music and dance into what we know and hopefully have an interesting mix.

​We dance to a great live band playing traditional old time music with Michi on fiddle, Chris on five-string banjo, Patrice on double bass and Paul on guitar, Dylan on mandolin and joined when possible by Linda on fiddle.